Emirates Airlines Shows Off Its ‘Diamond’ Onboard Lounge, But Is It Real?

Emirates, the luxury airline that set the Twittersphere ablaze in 2018 with the introduction of its “Bling 777,” is back again with a post of its “Diamond” A380 onboard lounge. 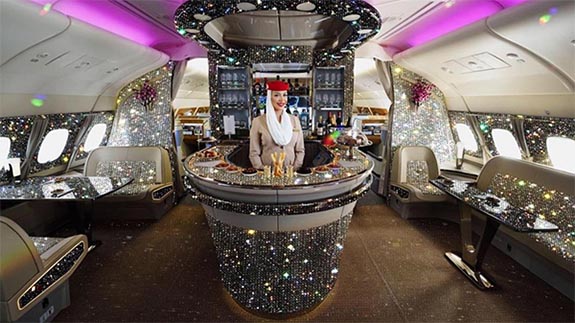 It was December 2018 when the airline took to Twitter to show off an Emirates Boeing 777 spectacularly embellished with diamonds. The image went viral instantly, as supporters and naysayers alike chimed in on what they believed to be the first-of-its-kind, gem-encrusted aircraft. 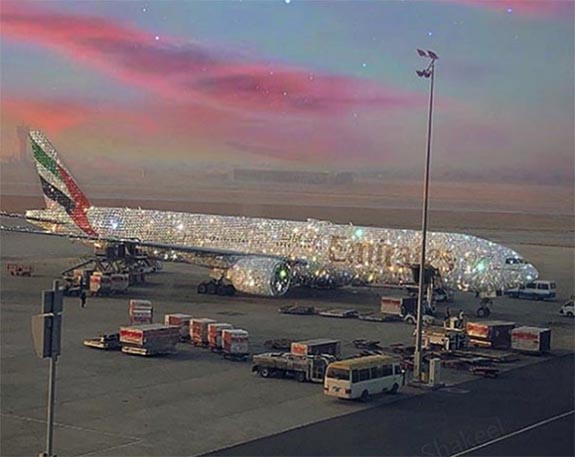 What many Emirates Twitter followers didn’t grasp was that the “Bling 777″ was a fanciful rendering by award-winning Pakistani artist Sara Shakeel, who specializes in photo-editing diamonds onto otherwise-ordinary objects.

At the time, the confusion on social media forced Emirates to clarify that the diamond jet was not real.

“We just posted an art piece made by crystal artist Sara Shakeel,” an airline spokesperson told Gulf News. “I can confirm it’s not real.”

On Tuesday, Emirates posted a new pic across its social media outlets with the following caption: “We know you liked our Bling 777, so here’s the Emirates ‘Diamond’ A380 Onboard Lounge. #FlyEmiratesFlyBetter.”

The super-realistic image shows how the lounge of the luxury jetliner would look if it was decorated from wall to wall with diamonds. The “diamonds” cover the seat backs, partition coverings, window trim and horseshoe-shaped bar area.