The Diamond Producers Association (DPA) is launching an $11 million ad campaign that is an unprecedented, cinematic telling of the natural diamond story. Titled “The Diamond Journey,” the video chronicles the history of a beautiful rough diamond from its fiery subterranean origins to its place as the ultimate representation of love, commitment and meaningful moments. 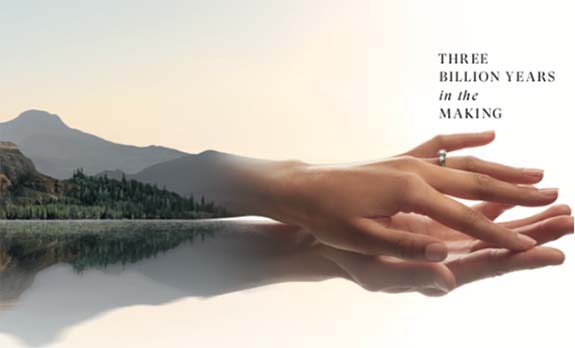 At the epicenter of the campaign is a three-minute hero film that could be mistaken as the trailer for a major motion picture, due to its impressive special effects, period costumes, cast of characters and engaging score by Oscar-winning musician, Atticus Ross.

As the newest part of the “Real is Rare, Real is a Diamond” platform, the campaign was developed in partnership with creative agency BBH London. The film was directed by Ian Pons Jewell, whose impressive client list includes Nike, Audi, Lexus and Michelob.

“We know from research that the majority of consumers are unaware that diamonds are the oldest thing they will ever touch or own,” noted Jean-Marc Lieberherr, CEO of the DPA. “It’s a powerful message that resonates and one this campaign celebrates with the tagline ‘Three Billion Years in the Making.’”

The campaign also uses the phrase “Before there was life, there were diamonds.”

Elements of the three-minute hero film have been edited into 60-, 30- and 15-second videos, which will be seen on social media platforms. The DPA is also producing striking portrait and landscape still visuals of an embracing pair of hands emerging from a natural scene. One of the hands is adorned with a diamond ring (See image, above).

The featured item in the campaign is a 2-carat cushion-cut diamond engagement ring, set in yellow gold. It was chosen because it evokes a classic, timeless quality with eternal appeal.

The advertising campaign, which has a primary target audience of 21-39 year olds, launches digitally on October 15 with Condé Nast, The New York Times and Sports Illustrated, among others. The creative ads also will be posted to Instagram, Facebook and YouTube.

“The Diamond Journey” commercials will be seen during NFL games on ESPN, holiday movies on the Hallmark channel, and The Today Show on NBC.

Check out the full-length version of “The Diamond Journey” here…