KC Man Who Fumbled Ring Into Pond Earns a Redo on 'Jimmy Kimmel Live!' AND Gets Original Ring Back

The forlorn boyfriend who famously fumbled an engagement ring into the pond at Kansas City's Loose Park earned a redo on ABC's Jimmy Kimmel Live! on Tuesday. Seth Dixon got to propose to Ruth Salas in front of a national TV audience on a set that mimicked the wooden footbridge where the original proposal took place. 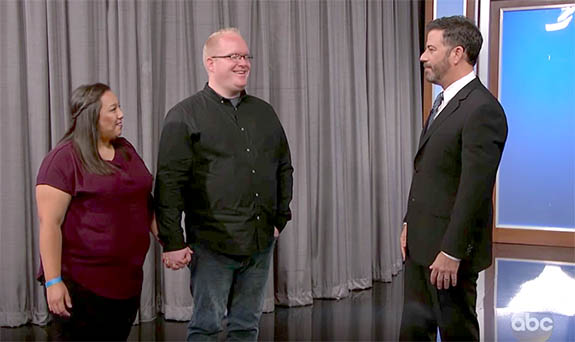 The redo came as a complete surprise for the couple, who thought that they were being invited to Los Angeles by ABC to be interviewed on 20/20. That all was a ruse to get the couple to attend the taping of Jimmy Kimmel Live!, where the host invited them onto the stage. He recounted their story and showed the original "oops" video, where — in mid proposal — the engagement ring flies out of the ring box, bounces on the bridge decking and falls through the slats into the murky pond below. Despite the valiant efforts of the couple and many friends, the ring could not be found.

The video went viral and triggered scads of proposal-gone-wrong headlines around the world.

Kimmel didn't only provide the venue for the high-profile redo, but also made sure the couple had a new engagement ring. The ring, presented by celebrity jeweler Neil Lane, featured an oval-cut center stone accented by 100 smaller diamonds in a halo setting. 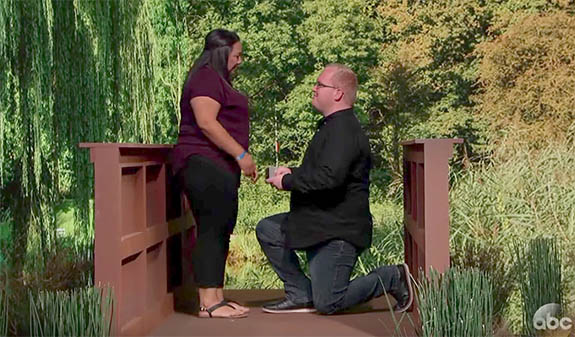 Dixon's redo proposal went off without a hitch.

“We’ve been together for four years,” he said. “You’re the love of my life. We’ve had ups and downs, and we’ve gotten through it all. We know this day’s been coming for a long time. And I love you. I want to spend the rest of my life with you.”

Then it got down on one knee.

“Will you marry me?”

What the ABC studio audience didn't know at the time of the taping was that back at Loose Park in Kansas City, metal-detector enthusiast Michael Long had successfully pulled the original ring from the mucky bottom of the pond. The resident of Springfield, Mo., had seen the couple's viral video on Facebook and made the 170-mile trip to Loose Park three separate times to dive for the ring.

“I wanted to make sure they got it back before somebody else found it and had the opportunity to not give it back,” Long told Kansas City TV station KSHB.

Dixon, an Uber driver, and Salas, a substitute teacher, got word of the good news while they were in California and told the producers of 20/20 that the ring was found.

"Throughout the week, we [had] been in constant communication with 20/20 and they have been made aware that we found the ring, but it wasn't in our possession yet," he wrote. "We have been completely honest with them during this entire process. Even with them knowing everything, they still decided to bless us with a new ring. After the show, we again mentioned the ring situation. They again said they wanted us to keep the new ring! All of the staff at Jimmy Kimmel Live! have been AMAZING and we are so thankful for them! They have been nothing but a blessing to us!"

Dixon also acknowledged the kindness and tireless efforts of a complete stranger.

"A BIG THANKS to Michael Long for offering his services to help us find the original ring!" he wrote. "We truly appreciate you going out of your way to find our ring and returning it to us. Many people searched for the ring, but you are the one who found it. We greatly appreciate your service! We recommend Michael to everyone as a professional treasure hunter! Thank you again!"

The couple plans to wed on October 21 and it's still not clear whether Salas will be wearing the original ring or the new one provided by the show.

Check out the video of Dixon's "redo" proposal on Jimmy Kimmel Live!. And, yes, Dixon and Salas happen to be wearing the same outfits (right down to the shoes) from the original "oops" video.